Routine – a sequence of actions regularly followed.  We all have them.  Even with my crazy schedule, I have my morning routine:  get up, put on coffee, take Tippy out, change clothes, make up the bed, etc.  It’s things that you do without having to think about doing them and, sometimes, you don’t remember that you actually have.  They just seem to happen.

I didn’t realize how important our morning routine was to Tippy until one morning a couple of weeks ago.  Because of having different things to do every day, sometimes I get up at 5am and sometimes it is 8:30am or later. No matter the time, Tippy doesn’t fuss to go out, ever.  She waits until I get the coffee going and then will calmly walk to the door where I put on her leash and we go out for her to pee.

That morning, I didn’t get up until 8:40 and, I only got up then because I received a phone call.  It was after 9 before I finished that call, then I called someone else.  I have a cordless phone, so decided to go ahead and take Tippy out while I talked, but couldn’t go far or I would be out of range for the phone system.  (Yes, I still have a landline.)  I put her on the leash, but she didn’t seem to find the perfect spot close to the house.  So, I unhooked her to let her go on further. She went a few steps up the driveway, turned around, and looked at me.  She did this several times and finally walked up the hill in the grass.  I kept watching, and she didn’t even squat to try to go potty.  After I got done with my call, I went to her and hooked her leash back on.  About 30 seconds later, she squatted and peed.  I was very surprised and found it funny.  (I certainly wouldn’t let that stop me if I had to pee.  LOL)  It’s only the morning constitution that she is on a leash, but, apparently, it is very important to her morning routine.

This week, I found out that there is another routine that is important to her.  If I get home late, I always take her out to see if she needs to go potty before closing up for the night.  One of my part time jobs is to usher for a local minor league baseball team.  The season opener was last week.  As the postgame fireworks ended, the rain and storm began.  It was still storming when I got home at 11pm.  I knew that my mom and dad had taken Tippy out  about 8pm, so I told her that we weren’t going to go out in the rain.  She was okay for about 30 minutes, but then started whining at the door. It had stopped raining, so I decided I had better take her out, that she must need to pee.  Nope. Just wanted to follow our routine, after which she settled right down and went to sleep.

I did a little research, and, like toddlers, routines are important to our furbabies .  I just didn’t realize how important they were to Tippy until these two instances.

Tippy spends a lot of time outside, so she has an outdoor and an indoor water bowl.  The one I got her for outside is made of a material that won’t get hot if it happens to get in the sun and has space around the bowl on the bottom on the underside.  It had the added benefit, when she was a puppy, that she was unable to pick it up and carry it off. 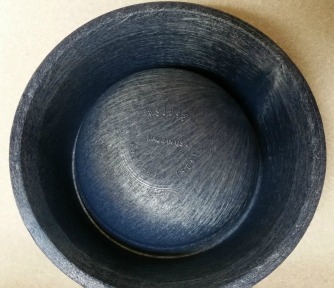 The underside of the water bowl.

I left the house at 7:15 this morning.  As is our routine, I tied Tippy out before I left and filled up her bowl.  I was going to be gone longer than normal today and they were calling for thunderstorms after noon, so, late this morning my mom and dad come up, let her run around for a few minutes, and then put her in the house.  When I got home, I took her outside and moved her water bowl into the garage. She sat at the faucet, wanting a drink, as she has done since she was a puppy.

While she was drinking, I looked over to where the water bowl had been sitting, and this is what I saw.

A HUGE pile of ants 1 to 1.5 inches deep!  How in the world did that many ants get under there?  How did I manage to move the water bowl and NOT see it or get any ants on me?!

I quickly put Tippy back in the house before she decided to investigate by sticking her nose in it.  I got my bug spray and began the extermination of these intruders.  I sprayed, stirred, and sprayed some more.

Dead ants and their eggs.

Close up of the dead intruders.

Once they were all dead and the bug spray had dried, I hosed them off of the driveway so it would be safe for Tippy when she went back out.

I had never seen anything like that before.  Sorry ants.  You picked the wrong place to try to set up housekeeping today.