Yesterday was a nice snow day for Tippy and I. There was already some snow on the ground and it continued to fall throughout the day.  As much as Tippy loves to play in it, I decided to let her off leash on our morning walk. She did GREAT!

She waited patiently while I closed the gate so the cows wouldn’t escape.

Well, maybe impatiently.  Then she was off exploring all of the sights, sounds, and smells.  I’m pretty sure she appreciated the fact that she didn’t have to go at my pace.

She stayed fairly close and came every time I called her.  The fact that she knew she got a treat might have helped slightly.

One of my favorite things about playing in the snow is how cute she looks with a white nose.

Later, while Tippy was taking a nap, I read some of the blogs that I follow.  I was inspired by Becoming a Wild Family to stop procrastinating on a quilting project.  It was originally supposed to be a Christmas present for my nephew eight years ago. I had gotten the quilt top put together, but had barely started on the quilting process.

I worked on it periodically for a couple of years and then just put it in the closet. My main problem was the time it took to even get it out and start quilting.  If I didn’t have at least half of a day to work on it, it didn’t seem worth the effort.  I purchased a small quilting frame so I could keep it set up and work on it when I only had 30 minutes or so to quilt.  That might have worked, but, two years later, it was still in the box.  Not now!  Yesterday, I put it together, put the quilt on it, and quilted for a couple of hours! 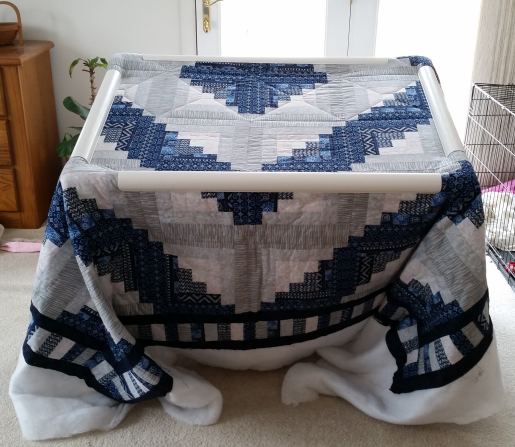 My goal is to get it finished by June so I can give it to my nephew and his wife on their 5th wedding anniversary. Yes, I am the Queen of Procrastination, but I am going to do this!

Tippy and I hope all of your snow days are full of fun and productivity!