This week has been pretty much run of the mill.  It rained a few days, so a lot of Tippy’s time was spent napping.  We did take off the trash and drove over to drop some stuff off at the Post Office.  She always enjoys a ride, no matter where to or how far we go.

We were able to take a few walks into the neighbor’s pasture.  The most interesting wildlife we found was this little frog.  It’s a Northern Cricket Frog, so named because of the noise it makes.  They are apparently fairly abundant, but I had never seen one before.  Had it not jumped in front of me, I would have missed this one.   In the “far away” picture he is at about 2 o’clock from the buttercup.  Do you see it?  It has great camouflage.

We’re almost sure that Tippy has some Australian Shepherd in her, so she likes to herd.  I am always concerned when we go into the pasture and see the cows.  She will usually take a run toward them, growl, and move on.  I think she does it just to get a rise out of me.  The cows know she is harmless, so will usually just stand there and look at her.

The last couple of times we have seen them she just walks right on by like they aren’t there.

It has been hot out, when it’s not raining.  Tippy and I aren’t ready for it to be humid and over 80°F.  After our walk today, she plopped down in her favorite spot to cool off…the kitchen tile.  I was tempted to join her.

We hope you make interesting discoveries and have fun adventures in the week to come.

This week Tippy turned seven.  At least we think she did.  Since she is a rescue and was found in a ditch with her sister, the exact birth date isn’t known.  My veterinarian estimated May 13th, so that is the day we celebrate.

It’s hard to believe that she is seven already! On the one hand, it doesn’t feel like I have had her very long. On the other, I feel like I’ve always had her.  She still has the energy of a puppy, with the maturity that comes with adulthood.  Well, sometimes she forgets how to adult and just runs around, getting clumps of the lawn in her mouth, and ignoring me when I try to get her to stop. I think we all need to have those days when we throw caution to the wind.

It’s been a good birthday week for her.  I have been home most of the week, so we took plenty of walks/runs back in the pasture field.  On one walk to get the mail, we found this little guy on the side of the driveway.  Do you see him in the first picture?  He was very well camouflaged. 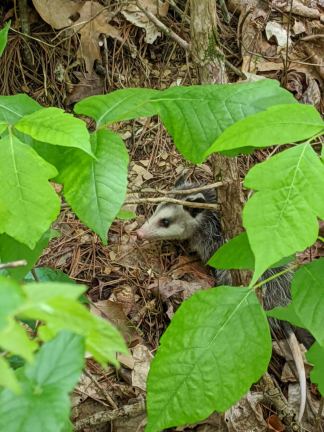 Then, this guy was sunning on the fence post when I closed the gate one night.  I was just glad he was practicing social distancing and didn’t jump on me for a hug or something.  He was just curious as to what I was doing.  He had zero fear.

We also had a birthday picture shoot in the daisy patch where my garden once was.  I noticed some daises out there a couple of years ago that I let go to seed.  Did the same thing the next year and this is the result.  They are my mom’s favorite flower.  I was amazed at how many there are.  The patch is just beautiful.  Pictures don’t do it justice.

I saw a rabbit take off right after I snapped this last picture.  Normally, Tippy would give chase, so I was really surprised when she just started sniffing around.  I got closer to her to try to get another picture when I heard it.  A little squeak.  Yep. She had found the rabbit’s nest and had the baby in her mouth.  It was too late, so I left and let nature take it’s course.  I hate it when she does that, but I know it is instinct and it’s not like the rabbits are in any danger of becoming extinct any time soon.  There are sooooo many around here.

She did get presents for her birthday.   First, I sang Happy Birthday.  I’m not sure what she thinks of my singing abilities.  She just knew something was different and she was going to get a treat when I was done.

I got her a puppy cupcake and a new duck squeaky toy.  I’m pretty sure the cupcake was a hit.  What do you think?

She had a hard time getting that first bite.  It kept rolling away from her.

She made a mess, but cleaned up every last bit.

She is really not a big fan of toys, but seems to like this one.  She just couldn’t find the squeaker.

We had a great week and are looking forward to many more together.

We hope you are all staying safe and have a great week full of fun adventures to share with those you love.

Today’s walk back in the cow pasture was a little bit more exciting than most.  As we started out, Tippy stopped, gave a serious look, ears back, and took off running as fast as she could.  I was expecting to see the usual squirrel, rabbit, turkey, or deer.  Nope.  It was a racoon!  Not sure why it was out at 3:00 in the afternoon.  It didn’t look or act sick, so maybe it knew a storm was brewing for the night and it needed to get something to eat before it hit.  Here is a stock picture of a racoon, in case they aren’t indigenous in your part of the world.

Fortunately, trees were nearby and it managed to outrun Tippy to the nearest one and scurry up.

Did you see that strange looking cat climb that tree? 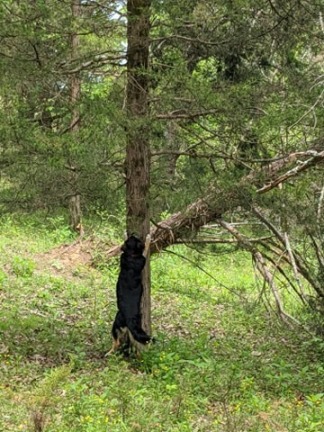 Do you see it?  It was well camouflaged.

I’ll help you out in case you can’t.

Tippy did eventually leave it alone and followed me on back into the hills.  It was long gone by the time we got back.

We also found interesting insects and spiders on some daisies.  The spiders are the Goldenrod Spider which feed on insects that land on the flowers.  They are very well camouflaged too. 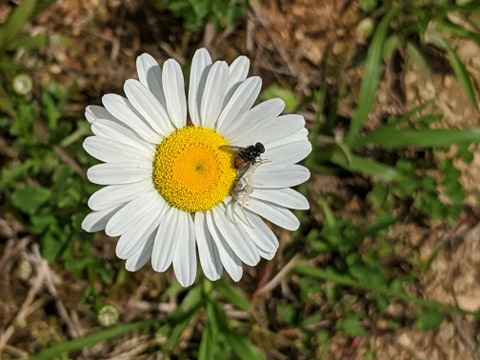 A small Goldenrod Spider having a late lunch.

To top it off, Tippy either ran through the edge of the pond looking for the racoon, or just waded in to get a drink, but she was pretty nasty from the belly down when we got home.  After getting a drink, she got rinsed off before being allowed in the house.

After that adventure, what was there to do except take a nap on the cool kitchen tile.

Did you have any exciting adventures today?