The other day, I was sitting at the computer and Tippy was in the bedroom.  I heard a low growl followed by a tentative bark…..grrrrr-ruff.  I thought she might have been sleep-barking, so ignored her.  Then, I hear it again.  Grrrr -ruff.   Grrrr – ruff.

I walked over to find out what she was unsure about.  I didn’t see anything.  No person, squirrel, bird, etc.  Grrr-ruff.  Finally, I got down on her level so I could see things from her perspective.  And there it was!

Do you see it?  The ghost on the porch? 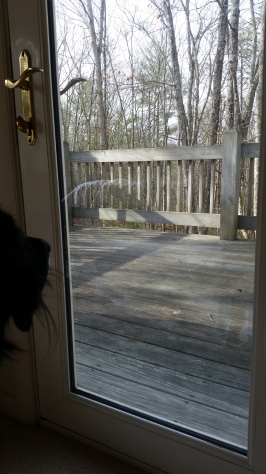 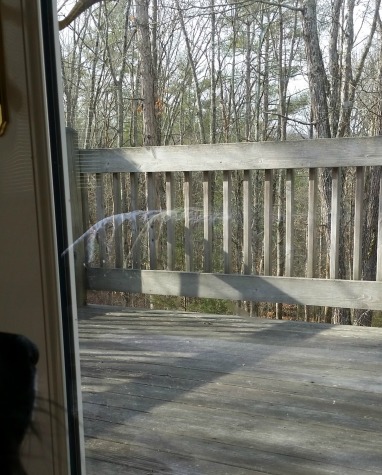 Not an actual ghost, of course, but a reflection of the bed “floating” around.  Grrrr – ruff.  I sat down and reassured her that I saw what she was trying to show me and that it was okay.  She sat on my leg for a minute, looked at me and back out the window a couple of times, and then went on about her business.  If mommy says it’s okay, it must be okay.

So, if seeing is believing, I’m pretty sure that Tippy now believes in ghosts. How about you?

I love old buildings.  I want to know their history and wish I could see them as they were in their glory days.  But, when they have outlived their usefulness, they are often abandoned and left for nature to reclaim.  Such is the case for the old gristmill by the river near my house.  My dad tells stories of taking corn there to have it ground into cornmeal.  The owner would keep a set portion as payment.  I assume he would then sale his portion to those who didn’t have corn, thereby getting the money he needed for essentials.  It was a simpler time, but probably much harder that we realize.

Tippy and I drove by there today.  There is no longer anywhere to get a vehicle off of the road to stop and look around, so I took a picture out of the truck window.  I wish someone had reclaimed it before it got in this shape.  How neat it would be to see corn ground there again, using water power to turn the mill!

Wanting to get some mileage on the truck, we drove on and made a big loop along the river and back to the house.  I had hoped to find somewhere to let Tippy get out and explore, but there really wasn’t anywhere.  All of the places on the river that we used to be able to stop are now closed to the public.  I think the main reason that the owners put up fences was that irresponsible people started leaving their trash laying around.  I certainly can’t blame the owners for wanting to keep their property safe and clean.  It does make me a little sad and nostalgic, though.

It didn’t matter to Tippy that we didn’t make any stops.  She was very content just to have had a 30 minute truck ride.  After taking in all of the new sights, a nap was in order.

I cracked up when I peeped in and saw her toys lined up and perfectly spaced!

We say that something is “Just what the doctor ordered.” when we get something that makes us happy.  Well, in this case, the “doctor” was a mechanic and I think Tippy may have paid him off for his prescription for keeping my truck in good running order – drive it a lot more.  At least 20 miles a week.  (Its 27 years old and only has a little over 52,000 miles on it.)  I have tended to let it sit a lot longer than it should because it gets horrible gas mileage.  Since it is now fixed and in good running order, I am going to do my best to follow “doctor’s orders.”

Today, we took off the trash and then, to get a few more miles in, took a field trip to Bible’s Covered Bridge.

According to the Tennessee Department of Transportation website, this is one of only four existing covered bridges in the state of Tennessee.  It’s pretty cool that it is in my neck of the woods.  I was saddened to see that people had painted graffiti all over the inside, but am happy that they have yet to “attack” the outside.

An historical marker has been erected since the last time I was there.  The picture on the marker is what the original bridge looked like – the one I remember as a kid.  We used to go fishing underneath it every summer and, as I recall, caught some pretty good sized catfish.

The back of the marker gives historical information about the bridge.  I got a picture, but because of the angle of the sun, it didn’t turn out very well.  So, the basics are that the Bible family settled in the area in 1783 on a land grant from North Carolina.  In 1923, a direct descendant of the original settlers had the bridge built in order to gain access to the main road without having to ford the creek.  The cover was put on the bridge in order to protect the timbers from the weather, and, therefore, make it last longer.

(I think Tippy looks like a kid that isn’t interested in history being forced to tour a museum.)

I tried to get a good picture of Tippy and the bridge.  Below are three shots taken about 5 seconds apart.  She would NOT look at the camera!  I guess I should remember to take treats next time. 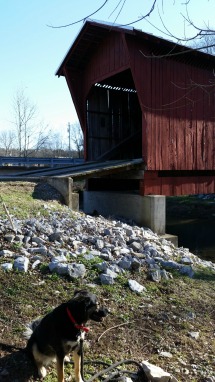 Not gonna look at you. 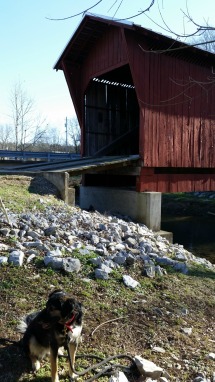 Fooled you, didn’t I?

This is the best you’re going to get.

She did enjoy exploring the area.  It’s always exciting to investigate new sights, sounds, and smells.